Winter continues to be upon us, and, as previously mentioned, it is freezing:

Beginning two months ago, the temperature of the water dropped so low that Sea Gem's built-in heating/air condition system was no longer able to operate. The system works by pulling heat from the water surrounding the boat, and once that temperature drops below 43 degrees, the whole system shuts down.  The system puts out plenty of heat when it is working (32,000 btu's), but unfortunately none when it is not.

The arrival of this day was expected and we were prepared (or as prepared as we could be). Several powerful, boat-safe space heaters were plugged in, ready to keep the boat warm:

All of Sea Gem's main rooms, including the engine room, now has its own space heater. Only the two heads (bathrooms) and the galley (kitchen) are without their own space-heating unit.

Each of Sea Gem's individual rooms is rather small, so these powerful little heaters are sufficient to quickly bring the room to a pleasant (enough) temperature. That being said, much more time was spent was spent wearing bulky sweaters and scarves:

As the temperature outside continued to drop, the space heaters weren't able to keep up (Did I mention that our boat doesn't have any insulation? It doesn't.).

So, we did what anyone in our situation would do--we fled to Florida for a month:

It was a much-needed respite.

The return back to the boat was quite the shock. The interior condition of the boat was...different than before. Although the heaters are powerful enough to keep the boat at a temperature which allows life to exist, the ambient temperature of the cabin isn't making anyone's "Top 10 list" in terms of favorite inside temperatures. As you might imagine, the rooms without heat--especially the heads--are particularly chilly. I often find little frozen treats around the boat:

The cold temperatures, coupled with the increasingly dangerous boarding conditions prompted us to do what anyone else in our situation would do--get an apartment for the winter:

Living aboard in the winter has produced many challenges--the most serious of which is boarding the boat safely.

The water surrounding Sea Gem is colder than ever before:

Sea Gem floats high above the water, and to board the boat, you must first climb a (small) staircase, then step aboard. Boarding, especially with a child in tow, has always been a challenge--one which we take very seriously. Boarding Sea Gem in icy conditions, however, is a whole new ballgame.

Currently, the finger pier leading to Sea Gem is lopsided because the water on one side of the pier is completely frozen. Due to the angle at which the finger pier now rests, the staircase is now actually pulling away from the boat, which means that "stepping" aboard can longer can be done in one swift, graceful step--it now requires a leap.

Leaping over ice-filled water from an ice-covered staircase onto a (sloped) ice-covered deck is not exactly safe. Doing this while holding a squirming toddler is, of course, terrifying.

There isn't a whole lot of room for error. As you can see, the staircase is just inches away from the water... 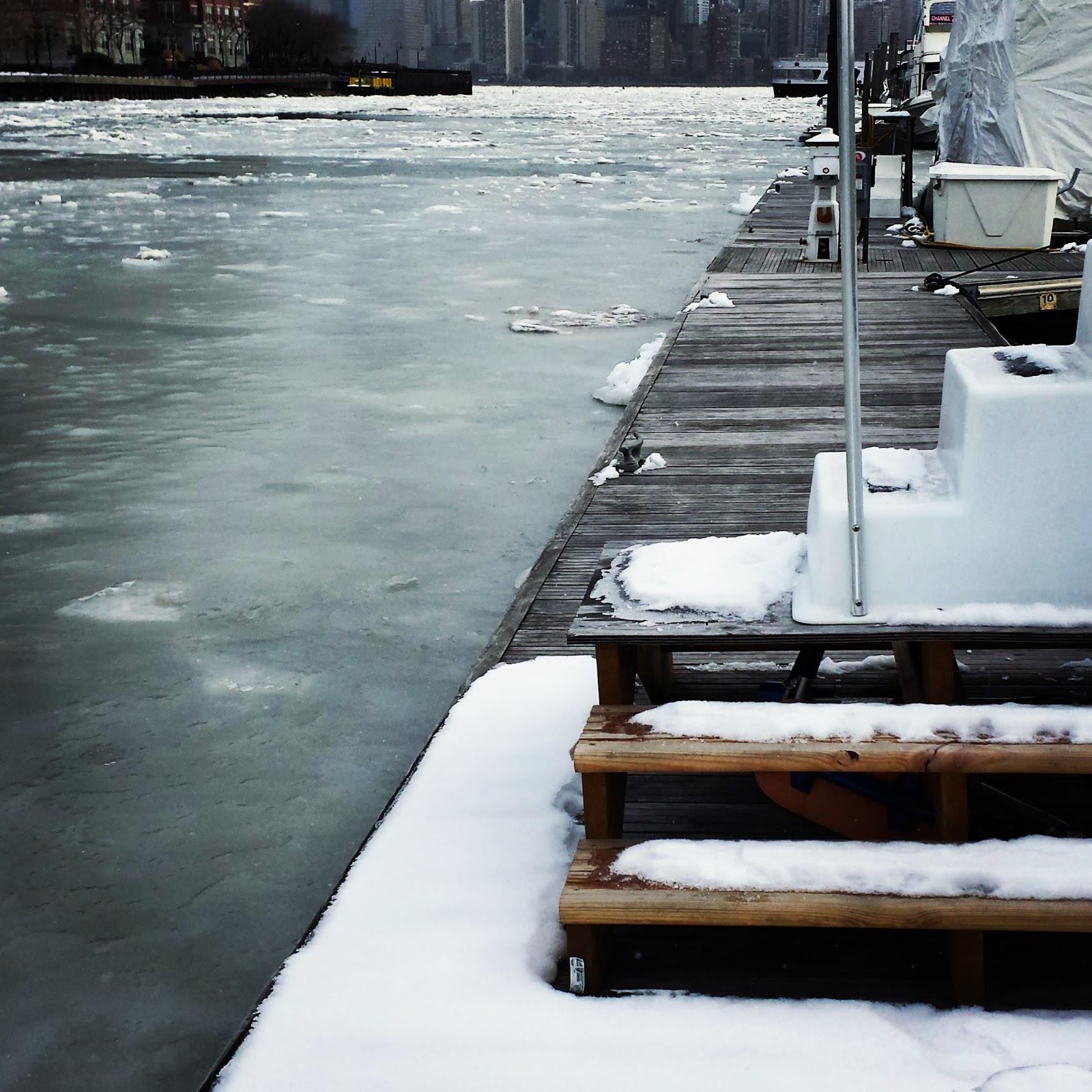 ...one misstep and we'd land here:

...or fall between the finger pier and our boat...

... resulting in head injuries and other bodily harm, before surely drowning to death in the freezing water of the marina.

Neither which is a plunge we hope to take.

Thankfully, the boarding situation has been remedied. More on that later...
Posted by Krissy at 1:59 PM 3 comments:

Our marina is turning into a frozen tundra! The water is literally freezing...er, frozen:

Winter has not been kind to all aboard:

My precious boat plants and their Woolly Pocket containers have, sadly, succumbed to the intolerable conditions of the northeast. (And yes, there are two Woolly Pockets and "plants" pictured above. See that stick poking through the snow? That twig used to be this beautiful plant.) Despite my boat plants' past displays of heartiness, I am 100% confident they will not be making a miraculous recovery this time around (I probably should not have left them to the elements... ah, hindsight...).

It isn't all death and despair though. The cold, icy conditions are as beautiful as they are dangerous:

While it has been surreal to watch the marina slowly solidify, the novelty of winter has certainly grown old. It is torturous to see our once-favorite, sun-filled spots laying dormant under a blanket of snow and ice:

Springtime, where are you?
Posted by Krissy at 5:56 PM 1 comment:

Shortly before winter set in, I was presented with this:
﻿﻿
Technically, I was presented with two. Ta-da:
﻿
Although they look like something one might find cupping Madonna's breasts, they are actually accessories designed for the feet--portable ice cleats to be exact. They fit snugly over the bottom of your shoes, like so:

Yesterday, when I poked my head out of the hatch and saw this welcoming sight...

﻿
I decided the time was right to sling on my cleats.

I strapped them on, stepped onto the deck, and... immediately slipped, nearly plunging into the icy cold water below the boat. And, as an added negative bonus (in addition to the near-death experience), I also marked up the deck (don't worry, not permanently):

Then, with the cleats still attached, I stepped off the boat and onto the dock. Much to my surprise, the cleats grabbed hold of the wooden dock, which made my walk down the snow-covered pier feel safe and secure. Apparently, it is our boat's ice-encrusted deck that is the problem (who knew?). I'm sure these little gadgets will come in handy when walking around the city (or parading around in private à la Madonna), but I'll be forgoing them while walking on deck (which I am avoiding at all costs anyway).
Posted by Krissy at 12:50 PM 3 comments: