The Landlubbers Got This One Right

Down here in Florida, it is difficult to find a boat--power or sail--without a small propane grill attached to the stern rail.  When it is nice outside (which is pretty much all the time), grilling dinner on the aft deck is a nice way to spend an evening.  Since Sea Gem has an aft cockpit instead of an aft deck, we have the added comfort of seats and plenty of space to put food, utensils, etc., while grilling.

Unfortunately, the propane grill that came with Sea Gem never worked that well (one setting: blast furnace), and it finally grilled its last meal (poorly, I might add) a couple months ago.

Since then, we've been on the lookout for a new grill.

The simplest solution was to get the same kind of grill we had before--a stainless steel kettle-style grill made specifically for boats.  There are two companies that specialize in marine grills, and as far as I can tell, they both build grills with the exact same three characteristics.  First, they are constructed of polished stainless steel, and they look shiny and nice.  Second, they are expensive compared to ordinary grills, as are most marine-specific products.  And third, they don't work nearly as well as their land-based counterparts.  Pretty much the same value proposition as an expensive designer watch that doesn't keep time.  Although the argument for the higher price, I suppose, is that they are built to last longer in the marine environment, I am doubtful.  Between our last grill and similar grills we have used in the past, they begin to deteriorate rather quickly.

Once we started looking for a new grill, however, we quickly noticed that several boats at our marina are now using compact Weber Q grills instead of the stainless steel marine models.  The stainless grills remain the most popular, but we figured that the Weber folks had to be onto something.

The Weber Q is very highly rated (as a grill, not a decoration), and at half the price of the marine models for the same size, we figured that even if the Q lasts only half as long in the marine environment as the stainless grills, at least we'll have a more functional grill during that time (and still break even after buying the replacement).

The Weber is not designed to simply bolt onto the back of a boat like the marine grills, and so a little improvising was in order.  As it turns out, the Weber (this is the smallest one, the Q100--still big for a boat grill) fits perfectly into the 20" Magma cutting board, which fits right into a fishing rod holder and is very sturdy.  The cutting board has tall fiddles to keep the grill in place, but we added a bungee cord just in case, and the result is quite secure. 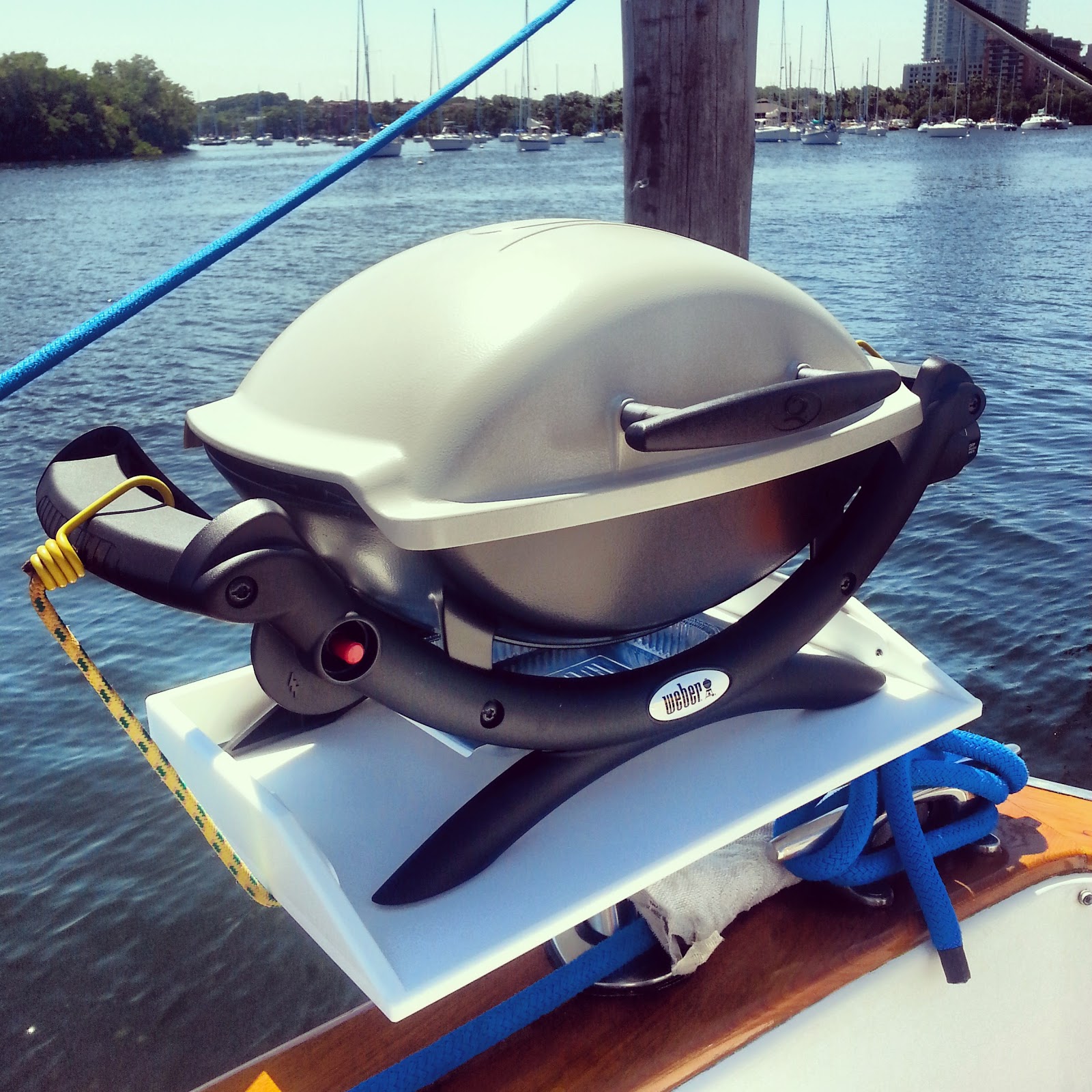 We had out first cookout on the Weber earlier today, and it proved to be far superior to our old marine grill. 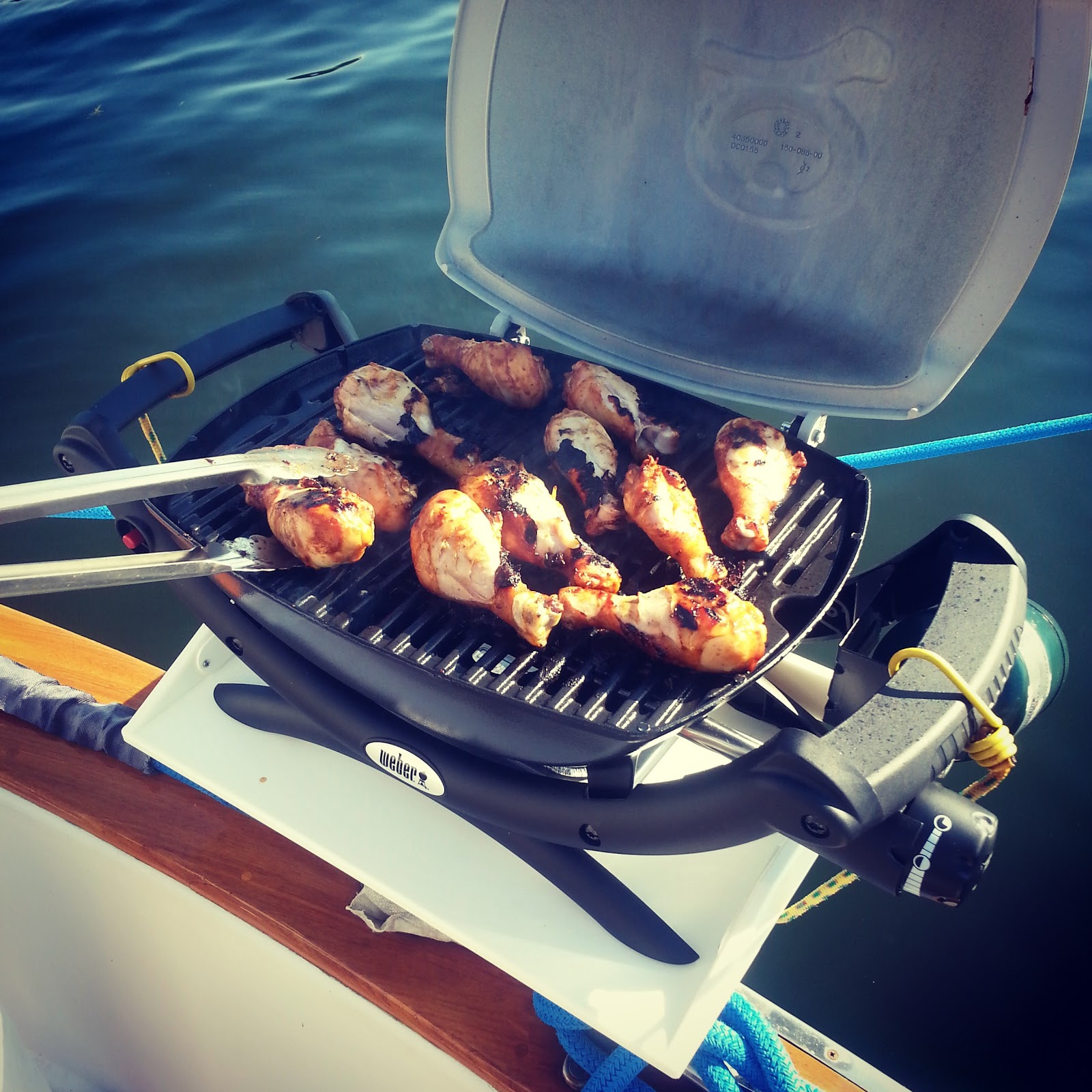 The flame can be reduced from blast furnace, the entire grill surface heats evenly (no cold spots like the old grill), and the meat stays juicy and delicious. 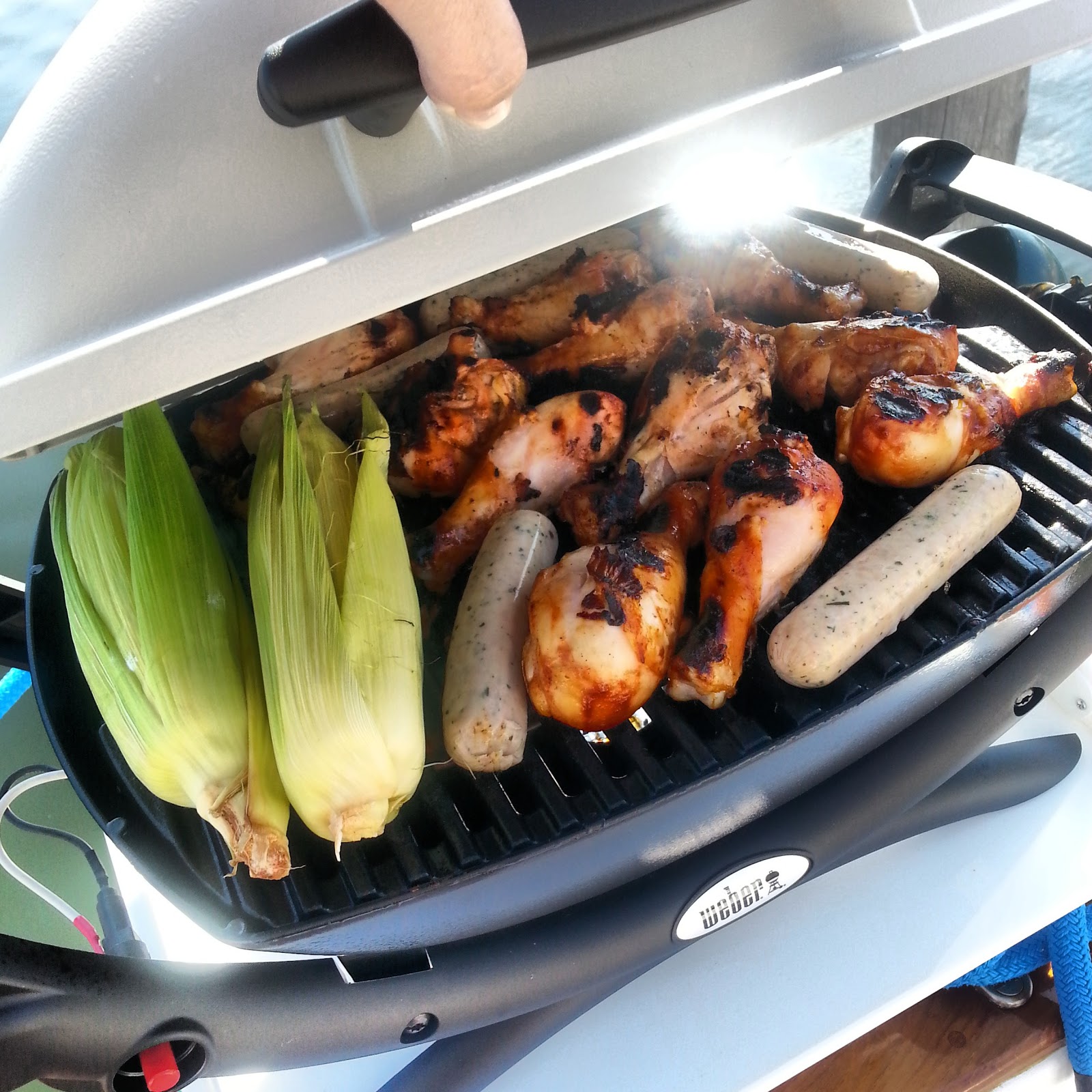 It may not shine brilliantly in the sun, but our new grill is a good grill, and isn't that all that matters?
Posted by Eric at 8:51 PM No comments:

Last week, several rainstorms passed through the area, and at the end of the week, we experienced unusually high winds. It was so windy, in fact, that Eric and I were awakened by the sound of wine bottles toppling over in the galley as several extremely powerful gusts caused our 32-ton boat to heel (we recorded 50 knots after the strongest gusts had subsided).

The very next day, Eric, Helina and I left for a long weekend trip (via car). Given the strong winds we'd had the night before, we decided to stow our new aft-cockpit accessories inside the boat, so that nothing could blow away. The only thing we didn't store were the aft-cockpit cushions.

Well, as luck wouldn't have it, after returning from our mini-vacation, I discovered that one of our aft-cockpit cushions--the exact cushion that had been missing for a year--was gone...again.

Upon realizing that our cushion had blown away, I became paralyzed by feelings of annoyance. In fact, it was the most severe case of annoyance that I have ever experienced. I have already spent an entire year of my life frustrated by having only 3 out of 4 cushions, and now one is missing again. To cope with the situation, I resurrected my "potting station" and insisted we embark on a late evening search for the cushion. Eric, who had already given up hope of finding the missing cushion, suggested that instead of searching for it, we simply not worry about the cushion because "the universe doesn't want us to have all 4 cushions." I chose to ignore his faux-Zen lie.

Needless to say, we're getting a new cushion made (pending a quote from a marine upholsterer) and getting better snaps and fasteners attached to the remaining cushions.
Posted by Krissy at 9:34 AM No comments:

The aft cockpit (or as Helina says, "aft poc-pick") has quickly become our family's new favorite place to hang out aboard Sea Gem. To prevent us from roasting while out back, we recently re-installed the aft cockpit's sun shade (we removed it before our last sail). With the awning back in place, we now have the perfect sun-to-shade ratio:

When we're not bumming around in the aft cockpit, we're playing in it (or rather, Helina is playing in it and we are watching her like a hawk to make sure she doesn't fall overboard):

And most evenings, we go out back, blow bubbles, and watch the sun set:

Maximum relaxation has been achieved.
Posted by Krissy at 9:03 PM No comments:

Lee Cloths to the Rescue?

After discovering that Helina was scaling her lower bunk's safety rail and recklessly diving into the bottom bunk (see video here), we had to make some minor adjustments to her room to better protect Helina from herself. For starters, we removed the guardrail on the lower bunk, since it was serving more as a ladder than a fence. Although this left her bottom bunk more accessible than before, we figured it was less harmful for her to fall from the bottom bunk onto the (padded) floor than it was for her to topple over the tall rail onto the (still padded) floor. Then, to discourage Helina from climbing into bed all together, we put up a lee cloth.


Usually, a lee cloth is used to keep someone in bed, but in this case, we hoped for the opposite. At first, Helina was thrown off by the lee cloth. Unsure of what to make of it, she left it alone and went back to sleeping peacefully on the floor. Our plan was working perfectly. Or so we thought. Curiosity eventually got the better of her, and after a few nights, she found her way into the bottom bunk

Here is how bedtime now unfolds. After we tuck Helina into bed (or floor) and shut the door, her first order of business is to hop up and switch on her lights (or flick them on and off in rapid succession, while announcing "lights" (or "luz" when she feels like habla-ing español)). At this point, Eric and I usually cut the power to her room, thus ending the light show (we're so mean). Surrounded in darkness, Helina then begins shouting "night-night" with increasing desperation until we respond. I've come to realize that her purpose in doing this has nothing to do with a desire to exchange pleasantries--she is simply manipulating us to giving up our location. Through this verbal exchange, she is able to pinpoint our distance from her room (sort of like baby radar). I know this is what she is doing because as soon as we are a certain distance away, I watch Helina (via the magic of video monitors) make a beeline to the bed and climb up.

She's a smart, crafty little thing.
Posted by Krissy at 9:05 PM No comments: