I’m not a huge fan of weighing myself. In fact, Eric and I don’t even own a scale. It isn’t that I am ashamed of my weight; I just don’t see the value in knowing what it is. I believe in being healthy and liking how my body looks, but I am not convinced that either of those two things are dependent upon knowing how many pounds I weigh.

Despite my anti-scale feelings, after the baby arrives, it would be helpful to have some indication that I am nearing my pre-pregnancy weight (whatever that may have been). Obviously, I can judge this by the fit of my old clothes, but having an official marker signifying that I have arrived at my previous weight would be nice for celebratory purposes (i.e. pigging out on fried food and cake). Thankfully, I have a unique gauge for determining when I’ve reached this milestone–our kitchen/coffee table.

As Eric explained in a previous post, the table in our salon converts from a coffee table into a kitchen table:

To collapse the table, someone actually has to sit on the table, and the weight of that person forces the table down. Pre-pregnancy, when I sat on the table, I had to wiggle a little in order to get the table to collapse completely. Now that I am almost into my 3rd trimester, the table glides down with no problem at all--a sure sign that my weight is heading in the right direction.
After the baby is born, I’ll use this same indicator to alert me to when I've reached my pre-pregnancy weight. While this is certainly not the most scientific method for determining one’s weight, it will do. Until then, my attention is focused on the most important thing--doing everything I can to ensure a healthy baby. So far, so good!
Posted by Krissy at 9:04 PM 3 comments:

Sea Gem has been around the world (with her prior owners), and I suspect that, out of all the places Sea Gem has been, Miami's weather and scenery doesn't even make the top-ten list. I've only seen pictures, but the South Pacific and Southeast Asia sure look nicer than Miami. And I can attest that the Caribbean is nicer. Sea Gem will travel to those places again someday, but in the meantime, we are tied to a dock in Miami.

That said, Miami is great. Coming from Kentucky, it is hard to complain about sunny, 80-degree days, for day after day, through the entire winter. We love it here, and we love being outside to enjoy the weather. And just this past week, we upgraded that experience.

Being outside in the sun is great, but it can be so physically demanding to have to sit upright (let alone stand up and walk around) to enjoy the weather. So we are very pleased that we no longer have to move a muscle when enjoying the weather: we bought a hammock.

Because space on a boat is always in short supply, we decided on a camping-style hammock that stuffs into a tiny little sack: 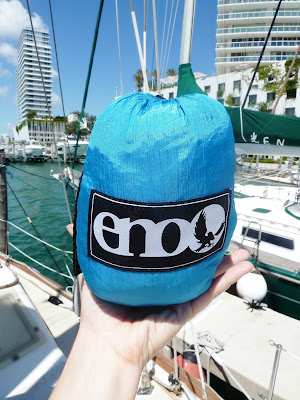 The particular hammock we decided on in the Double Eagle (it can fit both of us and up to 400 pounds) by Eagle's Nest Outfitters: 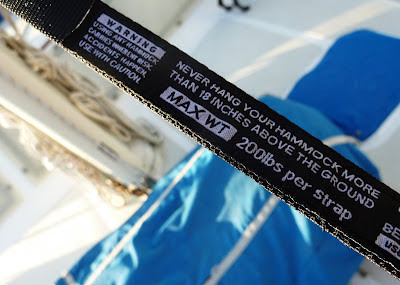 We can set up the hammock in only seconds. Two nylon straps wrap around the mast and the furled headsail, and the hammock clips to the straps with carabiners. The process is effortless, and when it comes to setting up a hammock, who wants effort?

Here, you can see how the hammock attaches to the headsail (and how easy it is to integrate a beer into the process): 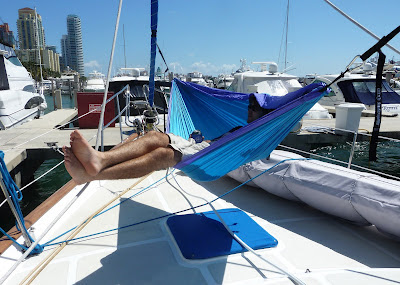 Because the hammock is made of a solid cloth instead of a rope weave, it provides some protection from the sun when you want it to: 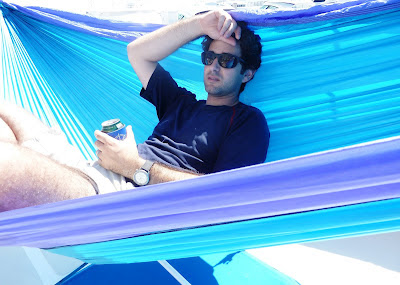 And, when the sun starts to set and the temperature drops below 80, we can wrap ourselves in the hammock for a little extra warmth: 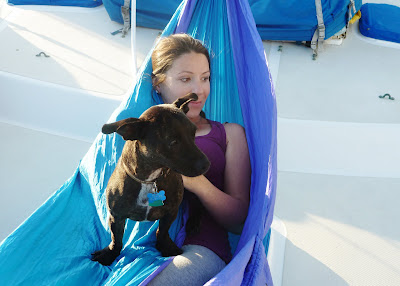 So, while Miami may not be quite as relaxing as the Bahamas or the South Pacific, we are sure doing our best to come close.
Posted by Eric at 8:37 PM 1 comment:

They Came from Below (and Above)

The yard surrounding my childhood home was filled with all sorts of animals: birds, squirrels, groundhogs, moles, rabbits, and the occasional deer. Living on a boat, the wildlife we encounter in our "yard" is much different than what I experienced as a land-based child. We certainly have our share of birds living within our marina neighborhood--the most interesting of which are fish-hunters: 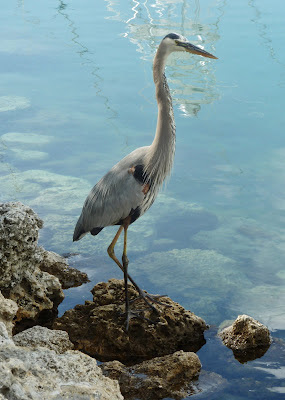 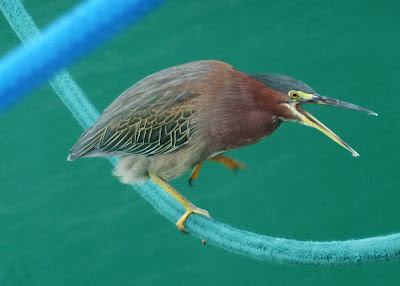 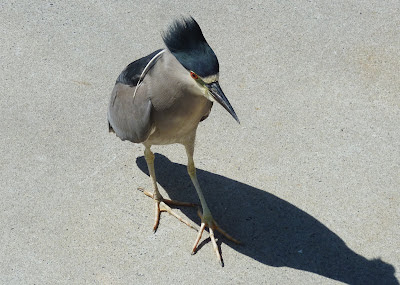 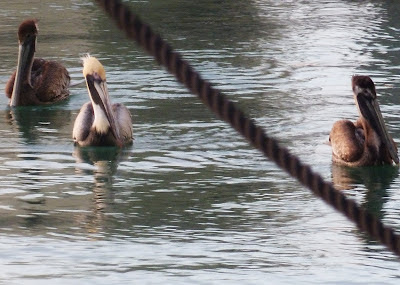 However, the most abundant animal life lurks within the water below.
A few days ago, while boarding Sea Gem, we saw a shadowy figure hovering just below our hull. At first, we thought it was our keel, but upon closer inspection, we realized the object was actually a massive (100lb +) tarpon. It was a bit unsettling to see such a large fish lingering in the water directly below Sea Gem. Each time we transferred Moishe on/off the boat, I kept envisioning him falling in and being swallowed whole by the mammoth fish.
Of course, this fear didn't deter me from wanting to keep the fish around. To encourage the tarpon to take up permanent residence beneath our boat, I decided to offer it some food. Unfortunately, all I had on-hand that day was a veggie sushi roll, which proved to be of little interest to the tarpon. The fish soon left, but thankfully returned a few days later with some friends: 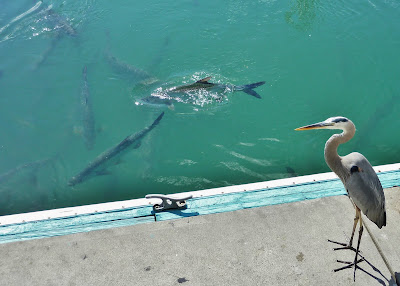 It is hard to appreciate the size of these fish from the picture above, but I can assure you--they are huge.
Tarpon aren't the only sea creatures swimming within in our marina's waters. Over the summer, we had an infestation of moon jellyfish (picture a solid mass of thousands of jellies floating in and out with the tide). Schools of Sheepshead are common sightings, but sometimes we get lucky and are graced with the presence of tropical beauties: 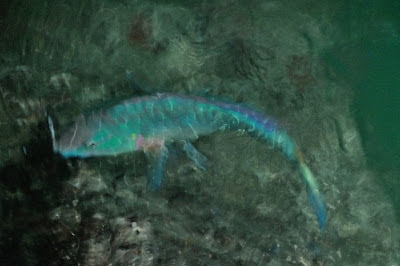 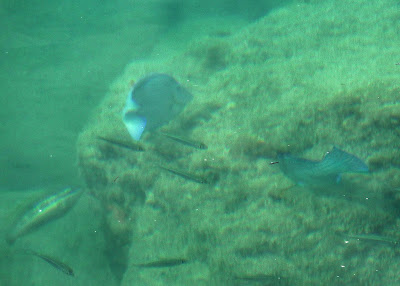 While the majority of what lives in the waters surround our boat is cold-blooded, sea mammals, particularly dolphins, pass through the marina sporadically. The other day, however, we saw something near our boat that I had been waiting for months to see: a manatee! Unfortunately, I wasn't able to snap a picture of the particular manatee we saw, but thankfully, I have some manatee photos that I took a few years back (for the most part, manatees all look the same, so you aren't missing anything by viewing this out-of-date photo): 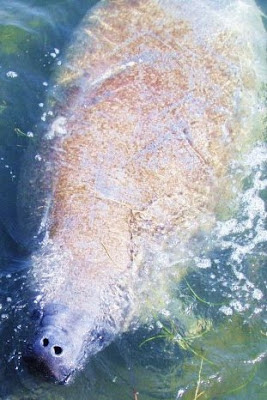 Although we hope the jellyfish masses won't return anytime soon (or ever), we welcome the prospect of a manatee infestation.
Posted by Krissy at 7:06 PM No comments:

But what about sinking?

Shortly after moving aboard Sea Gem, Krissy explained her fear of the boat sinking while we sleep.  Although, given the right combination of bad events, Sea Gem, like any other boat, could sink, I have absolutely no fear of that happening while we sleep or under any ordinary conditions.

Why?  Because Sea Gem has a fantastic automated pump system that can keep us dry and afloat even if we do spring a serious leak.

Any water that comes aboard Sea Gem will accumulate in the bilge, which is the lowest part of the boat.  Here is our bilge: 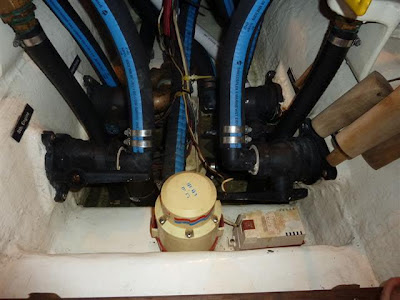 The cylindrical object in the middle is a water pump that can pump nearly 2000 gallons of water per hour from the bilge to the outside of the boat.  To its right is a float switch: when the water reaches the float switch, the bilge pump turns out automatically.  We test the pump frequently to ensure that it is functional at all times.  So the short answer for why we won't sink in the middle of the night is because we have an automatic bilge pump.

Well, the bilge pump you see is actually our backup automatic bilge pump.   If you look very closely, behind the bilge pump is the top of another bilge pump, which can also pump nearly 2000 gallons per hour.  The partially hidden pump is actually our primary bilge pump.  It is lower down in the bilge, so it is the first to turn on.  If water comes in extremely quickly and overwhelms the primary pump, or if the primary pump is not working, then the secondary pump will kick in to keep things under control.

But what if, somehow, all three float switches fail, you ask?  What then?

Well, as highly improbable as that situation is, we are prepared for it.  Next to the primary bilge pump is a fourth float switch that is hooked up to a piercing alarm in the cabin.  If the water reaches the level of the secondary bilge pump (i.e., the primary pump is overwhelmed or is not working), the alarm comes on and is more than loud enough to wake us, Moishe, and anyone in a nearby boat from the deepest sleep.  The alarm is powered by its own batteries, so even if our entire electrical system dies, the high-water alarm will still
sound. 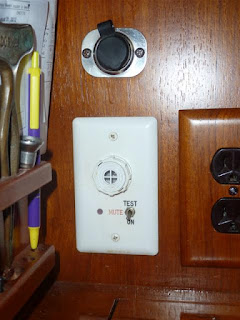 Once awake, we can keep the boat dry until we can find and stop the leak using any number of methods.  If our electrical system and the pumps are working, we can flip a switch to override the bad float switches and manually turn the pumps on.  If the pumps aren't operable for some reason, we have a manual bilge pump (manual as in you manually pump a handle) that one of us can use while the other finds and plugs the leak.  As you can see in the first photo, almost all of the places where a hose or fitting could fail and allow water to enter the boat are located in the same place by the bilge, so it would be easy to locate and turn all the valves to the off position, and we have a variety of wooden plugs (conveniently located next to the fittings) that we could pound into a failed hose or fitting if the valves won't turn.

Convinced we are covered?  Or are you wondering what we do if all of our float switches and electric pumps fail and our manual pump fails too?

We have a backup manual pump too, of course.  And if too much water is coming in to manually pump (or if, somehow, both manual pumps are broken), we have two of the most powerful backup pumps around: our two diesel engines.  We can turn a valve that causes the engines to pump water from the bilge (they normally pump water from the ocean for cooling).

So, can Sea Gem sink?  Of course, but it sure is unlikely, and it certainly isn't going to happen while we sleep.