When the tide is low, getting on and off of the boat is relatively easy. During low tide, our boat and the pier are at the same level, so as long as you don’t slip, boarding is as easy as putting one foot in front of the other. Here is a photo showing the distance from boat to pier when the tide is low: 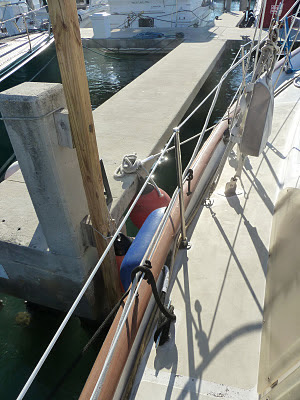 Boarding when the tide is high or when the wind is blowing like crazy can be a bit more challenging and requires some skill. Our boat is large and tall, so when the tide is high, Sea Gem sits high above the pier (this is why by our 2nd day on the boat, we invested in the tiny step stool you see in the picture below): 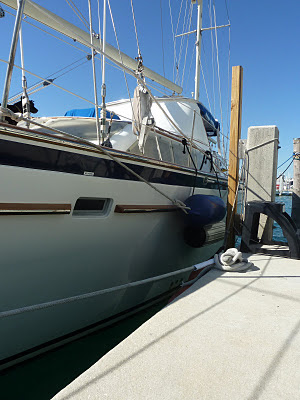 Even with our step stool in place, during an extremely high tide, the distance in height from our deck to the top step can be over two feet. Even though Eric and I have become pros at boarding our boat in all sorts of conditions, when the tide is high, it can be a bit daunting.

One question we are often asked–usually immediately after a guest sees Eric and I boarding Sea Gem during high tide–is how Moishe gets on/off the boat. The short answer is that he doesn't–at least not without human assistance. Although many people allow their dogs to jump on and off their boat, we don’t. We've heard stories of dogs drowning as a result of boarding mishaps, and considering our little Moishe doesn’t exactly have a swimmers body, we aren’t eager to provide him with opportunities to put his inadequate swimming skills to the test.

Since we don’t allow Moishe to board solo, to get our pup on and off the boat, Eric and I rely on a technique we affectionately refer to as “Dangle Dog.” Dangle Dog requires two people. One person (usually Eric) exits/boards the boat first, then Moishe is "dangled" over the water before reaching the open arms of whomever is waiting on the other side. During the handoff, we usually chant “dangle dog, dangle dog, dangle dog.” Here is Moishe mid handoff: 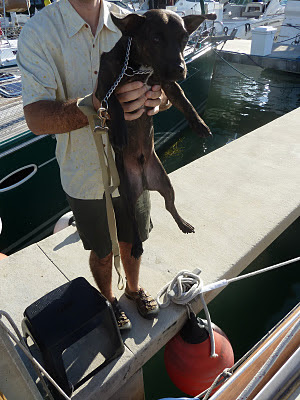 As you can see from the picture above, Moishe isn't very enthusiastic about Dangle Dog, but he appreciates the care we take to keep him safe.

If only one of us is available, Dangle Dog isn’t an option, as it requires two humans. In these instances, we simply hold Moishe “baby-style,” and board the boat in the same manner as we would board without him.

Does Moishe enjoy either of these techniques? Unlikely. However, he does like being safe—and that is all that matters.

Posted by Krissy at 9:05 AM No comments:

Most boat owners will quickly attest to the fact that things on boat break.  They break quickly, and they break often.  Fixing things is just a part of boat ownership.

Of course, some things last longer than others.  We are fortunate to have purchased Sea Gem from caring owners who, over the past 25 years, figured out what is built to last and what is not and equipped Sea Gem accordingly.  Nothing lasts forever, especially on a boat, but we are fairly confident that everything on Sea Gem is built to last for about as long as is possible on a boat.

Although Sea Gem has air conditioning, we don't run it all the time.  It is costly to run the air conditioner when not plugged into the grid at dock, and when it isn't that hot outside, it is nice to open the windows and, when necessary, turn on the fans.

We have lots of fans.  Nine that I can think of at the moment: two in our stateroom, one in our head, two in the salon, one at the nav station, one in the bunk stateroom, and two in the guest stateroom.

As it turns out, not all fans are created equally.  At the nav station, we have one of those "soft touch" style fans.  It is noisy and moves hardly any air.  And I've touched it--it is not that soft.  The only reason that it still works, no doubt, is because it has not had any use--because it is a lousy fan.  We have three other fans in the boat that move plenty of air, but are incredibly noisy.  Fine during the day, but certainly nothing you can sleep to.

Our remaining six fans are "Hella" fans.  They are whisper quiet, move plenty of air, and draw almost no electricity.  They can also be adjusted and locked in almost any position.  And they last forever.  For an interior fan on a boat, you could not ask for anything more. 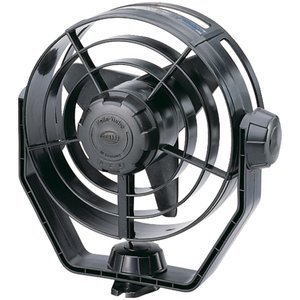 Last night, one of our six Hella fans died.  I hit the switch to turn it on before we went to bed (it points from an opening port to the bed--an ideal position), it slowly turned a couple times, and then it stopped.  I was tired, so I went to bed and hoped that it would fix itself over night.

It did not.  This morning, I checked the fuse on the dead Hella fan.  Aha!  The fuse was broken.  I replaced it, and the fan immediately sprang to life.  Well, sort of.  In a sprang-to-life-means-spew-smoke-and-burn kind of way.  I quickly turned the Hella fan off.  It was officially dead.

What is so great about a fan that breaks, you ask?  First, that fan was probably used more than any fan in the boat.  The knob was worn down with use.  Second, it was probably more than 20 years old.  The fan was stamped "Made in West Germany."  It clearly did all that was asked of it and more.

Fortunately, we have a spare Hella fan on the boat.  It was probably purchased 20 years ago, too.  Everything was in German.  It had that 1980's style font on the price label.  And, of course, it was proudly made in "West Germany."

Five minutes later, it was installed and silently doing its job.  I don't expect any problems for about twenty years.  I just hope they (Hella?) still makes Hella fans then.  Maybe we should stock up?