The fourth of our four current finalists, ordered from smallest to largest, is the Gulfstar 54 Sailcruiser. By most measures, it is an enormous boat--54 feet long, 16 feet wide, and 50,000 pounds. Indicative of its size is that the Sailcruiser has two diesel engines contained in a walk-in engine room beneath the salon floor. It's a big boat. Gulfstar built both sail and motor yachts in Tampa Bay, Florida, from 1970 to 1990. Many Gulfstars continue to suffer from the lingering effects of poor-to-middling build quality, although quality greatly improved by the mid-1980's when the Sailcruisers were produced. Gulfstar produced a total of 23 Sailcruisers, all between 1985 and 1986. Gulfstar was a massive operation, often producing more sailboats in a year than a small company like Northwind has during its entire existence. The Sailcruiser was one of the last sailboats that Gulfstar designed and produced, before the company completely switched over to motor yachts.

The Sailcruiser is a very unique boat in a variety of ways. As is by now something of a ritual, I'll start with the interior:

Starting with the stern (right side of this drawing), there is first an aft cockpit. The Sailcruiser is a center-cockpit boat like the others, but it has a second, smaller cockpit in the back of the boat for lounging, fishing, dining, etc. The aft cockpit is directly accessible from the master stateroom, which is forward. The master stateroom has a center line queen, a settee, and lots of storage. Attached to the stateroom is the master head with separate stall shower. Forward of the master stateroom on the starboard side of the boat is the galley. It is big and easily has enough room for two cooks. Forward of the galley is the massive salon. To starboard is the dinette, and to port is a bar and entertainment area with room for two armchairs (the Sailcruiser is one of very few boats with dedicated space for regular armchairs). Also to port is a large office area. Forward of the salon is a staircase leading down to the large engine/mechanical room and also a closet contained a washer and dryer and storage shelves. Further forward is a guest stateroom with two bunks and storage to starboard and the guest head with separate shower to port. All the way forward is the second guest stateroom with a queen bed, lots of storage, and a settee.

The Sailcruiser easily has the most interior volume of the boats we are looking at. The salon is also the closest to a real living room. It has a lot of open space and we could personalize it by selecting our own armchairs (which would need to be strapped down when sailing). The Sailcruiser is also a raised-deck-salon design like the Northwind, so it has large windows and is very bright below. Here is a photo of the salon: 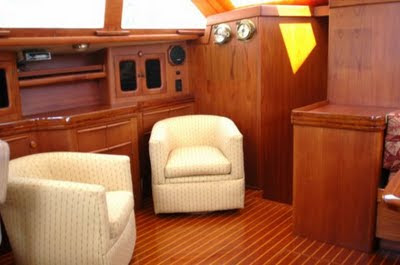 The second cockpit also distinguishes the Sailcruiser from the other boats we are considering. It is a nice, comfortable place to relax and fish, and it is also lower to the water than the rest of the boat, which make it easier to get in and out of the water or dinghy. The Sailcruiser does not have a built-in boarding platform like the Northwind and Taswell, but the lowered aft cockpit will make access easier than in the Hans Christian, for example. Here is a good photo of the aft cockpit: 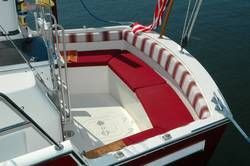 One downside of the layout is that, in order to create room for the door from the master stateroom to the aft cockpit, the master bed needs to be placed directly underneath the main cockpit. The result is that headroom over most of the bed is limited, as indicated here: 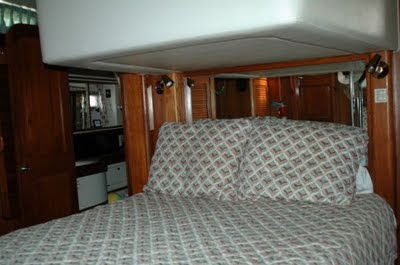 The Sailcruiser is also unique as a sailboat. Although the boat is huge, the masts are very short--a full seven feet shorter than on the Northwind, the smallest boat we are considering. The result is that the Sailcruiser can make it under shorter bridges than the other boats, but clearing bridges that short is not essential to us, and the downside of the short masts is that the sailing performance, particularly when sailing towards the wind, is compromised. Similarly, the Sailcruiser has a far shorter draft than the other boats we are looking at. Of the three smaller boats, the Northwind has the shallowest draft, drawing about 6'4". Even though it is much larger, the Gulfstar draws only 4'11". Again, there are pros and cons to this shallow draft. The Gulfstar will have a much easier time navigating the Bahamas and other shallow-water cruising grounds, but its sailing performance will be even further compromised. Although the Sailcruiser may be slow and ungainly under sail, it excels under power. It is the only boat we are considering with two engines, which allows for redundancy as well as better handling under power.

And now a brief list of pros and cons of the Gulfstar 54 Sailcruiser:

Pros:
Largest interior
Shallow draft (4'11")
Short masts
Two engines (redundancy and may be easier to maneuver under power than others)
Big engine/mechanical room makes maintenance easier
Fiberglass decks easier to maintain than teak
Aft cockpit is an ideal place to lounge and fish
Layout allows us to bring armchairs aboard

Cons:
Builder is long gone and brand is known to have quality problems
Most Sailcruisers will require frequent observation and repairs to minor structural problems
Interior build quality and materials are generally good, but not equal to the other boats we are considering
Worst sailing performance
Low headroom over master bed
Least attractive exterior (bulky appearance, no teak decks, etc)
Most expensive to dock and maintain (more length, more engines, etc)
Getting old (all at least 25 years old)
Posted by Eric at 1:49 PM