The third of our four current finalists is the Taswell 49. Taswells were built by the Ta Shing Yacht Company in Taiwan. Ta Shing in still in business, but it is currently focusing on power boats (more people need to learn how to sail!) and no longer builds the Taswell line. Ta Shing has been building boats since the late 1970s and is considered to be one of the highest-quality boat builders in the world. They built a few lines of sailboats over the years, from the very traditional Babas, Pandas, and Tashibas (which look sort of like the Hans Christian), to more modern designs such as the Taswells. The Taswell 49 was introduced in 1989 and is a fairly contemporary design, much like the Northwind. The 49 was eventually modified slightly to become the Taswell 50, and production continued until 2002. I haven't been able to figure out exactly how many were built over the years, but I suspect between thirty and sixty. The Taswell 49 is 49 feet long, 15 feet wide, and weighs 32,000 pounds.


We are pleased to hear from you and noted you are interested to our Taswell 49.

The tooling was destroyed, so there is no plan to resume the production. No complete information is left either.

Taswell series were well recognized in the past, I would wish you find one soon.

Let's start with the interior layout:

Although the Taswell is similar to the Northwind in design, a comparison of the two layouts makes it clear how much larger the Taswell is (6 extra feet in overall length makes a big difference). Starting at the stern (left), there is a massive (for a boat) master stateroom with a centerline queen, two settees, a large hanging closet, a vanity area with a seat and storage, and a large private head with a separate shower stall. Moving forward, there is a navigation station/office area to port. To starboard is a U-shaped galley with large sinks and good counter space. Further forward is the salon with a large dining area to port and a sitting area to starboard. The boat we are looking at is slightly modified--the dinette settee does not wrap all the way around into the center of the boat, which opens up the salon and provides space for our rug. Further forward is the first guest stateroom to port, which has two bunk beds and a hanging closet. To starboard is the guest head, which has a separate shower stall. All the way forward is the second guest stateroom, with a double bed, a hanging closet, and a seat.

The layout leaves almost nothing to be desired. The third stateroom is what really distinguishes the Taswell from the Northwind and the Hans Christian. Between the room with bunk beds and the room with the double bed, we could handle any combination of kids that we would ever want, and could even accommodate guests as well. One possible downside is the U-shaped galley. Although it is a nice size and keeps the cook secure while the boat is moving, it has only enough room for one person at a time, as opposed to the linear galleys found in the other boats we are considering.

The Taswell 49 is not a raised-deck salon like the Northwind (although later Taswell 50s were), nor is it a pilothouse like the Hans Christian. The result is that it has no area with huge windows and is darker throughout. The Taswell is brighter than many similar designs, but still darker than the other boats we are considering. To illustrate, here is a photo of the salon in the Taswell, which is the brightest part of the interior: 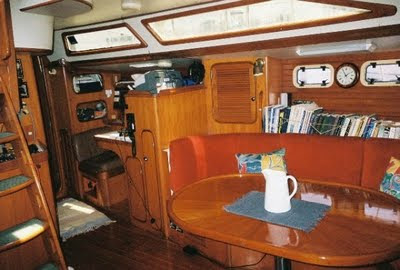 A casual comparison between this salon and the salon in the Northwind reveals just how much of a difference the raised-deck-salon design makes in interior brightness. That said, Ta Shing's craftsmanship is among the best, and the interior is built and finished to an ext﻿remely high standard.

Here is a view of the exterior of a Taswell 49, which is appropriately nestled next to a tropical island: 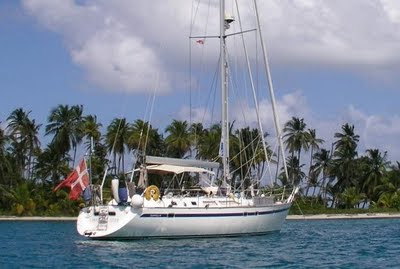 Looks right at home, doesn't it? Note that the Taswell, like the Northwind, has a built-in boarding platform at the stern, which makes it very easy to get in and out of the water, and also to transfer cargo and people to and from the dinghy. Although you can't tell in this photo, the Taswell has teak decks, which look great and offer great traction, at the expense of substantial maintenance every ten to twenty years. Like the Northwind (and unlike the Hans Christian), the Taswell has little or no exterior teak trim that needs to be varnished, resulting in a low maintenance exterior.

The Taswell is also both fast and seaworthy. Taswells are fantastic offshore boats and can be found cruising all over the world. This photo sums this point up nicely and features a Taswell looking graceful while beating into some pretty nasty weather: 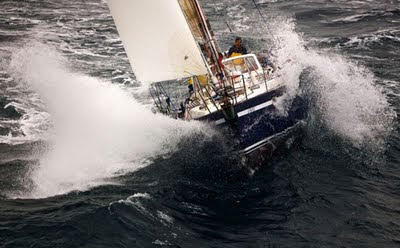 And now for a brief list of the pros and cons of the Taswell 49:

Cons:
Only one person can comfortably cook in the galley
Deepest draft (6'9")
Darkest interior
May be difficult to maneuver under power
So-so appearance (flat lines and eighties-style stripe)
Steep and long ladder into the interior (may be difficult for some to enter and exit)
Most difficult to sail (large sails)