I mentioned in my last post about choosing a boat that I would describe the models were are most seriously considering in a particular order, from the smallest to the largest. Accordingly, I started with the Northwind 43, which is uncontroversially the smallest boat we are considering. It is the shortest (43 feet), the narrowest (14 feet), and the lightest (25,000 pounds). Now that it is time to write about the second-smallest boat, things get complicated. This post features the Hans Christian 44. At 44 feet in length, you'd think it is only barely larger than the Northwind. And at 14 feet, 7 inches in beam (width), it again appears not to be substantially larger. But here is the thing: the Hans Christian weighs 60,000 pounds. It is more than double the weight of the Northwind, and is a full 20% heavier than the "largest" boat we are considering. Weight (displacement in boat-speak) is also a very telling statistic. It indicates in general terms how much stuff the boat can carry, how it will be impacted by waves, and its volume. So, many people would agree that the Hans Christian 44 is in fact the largest boat that we are considering, even though it is barely longer and wider than the Northwind, the smallest. But length is what people think of first when talking about the size of boats (and is also what you pay for at the marina), so I'm sticking to length here. Just note that it is an imperfect indicator of how big these boats really are.

The Hans Christian 44 is a pilothouse design, which means it has a raised cabin area where most of the cockpit would ordinarily be. The result is that you can operate the boat from indoors--out of the sun, wind, rain, etc. In addition to the controls for the boat, the pilothouse also contains the galley (kitchen) and a dining table. The pilothouse has large windows (so you can see where you are going when steering the boat), much like a raised-deck salon, so the inside is bright and airy. Hans Christian is a builder formerly based in Taiwan (now Thailand) and has been building very traditional, heavily-built boats since the 1970s. Hans Christian built fifteen of the 44's, all in Taiwan during the early 1980s.

Here is the interior layout:

The first thing you may notice is that it is hard to tell the bow of this boat from the stern. The stern is at the left. This boat, like most Hans Christians, has a canoe stern. This type of design is also known as a "double-ender" because the back has the same shape as the front. There are some theoretical advantages and disadvantages to this design, but for the most part, the practical differences are aesthetic only. Ok, on to the accommodations. Starting at the stern (left), there is a master stateroom with a centerline queen bed, two hanging lockers, and large settee. The master stateroom has a curved stairway to port that leads up to the pilothouse, which is really like a second floor because it is above deck-level. Beneath the pilothouse is the master head, which has a large shower stall lined with porcelain tile. It looks sharp. The pilot house has the galley, the inside steering station, and a long dining table with single bench. Going back downstairs and towards the bow is the salon with a curved settee with coffee table to port, and two seats with a bar sink (and bar storage) to starboard. Forward of the salon is the guest stateroom, with a very large closet, a head with separate shower stall, and a queen bed. We consider the queen bed in the guest room to be a disadvantage because, as is, there is no way that we could have two kids (thinking ahead) share the same room. That problem is not here now, though, and boats can be modified, so it doesn't disqualify the whole boat.

Here is a photo of the master shower with tile: 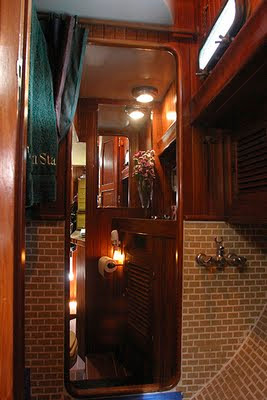 And a photo of the downstairs salon (note that is is much darker than the Northwind's salon because it is not a raised-deck salon): 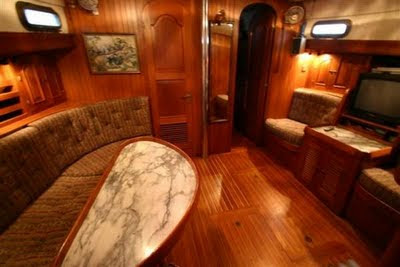 But here is the pilothouse area, which is very bright, much like the Northwind:

And here is a photo of the exterior of the boat: 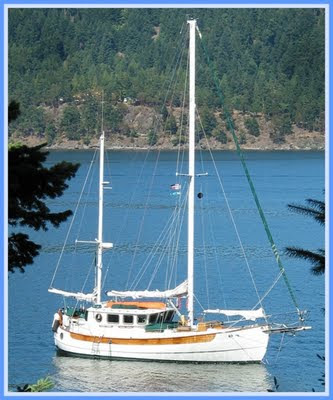 Note the raised pilothouse. Also, the boat is a ketch rig (two masts placed a certain way), and is a very traditional design. It has lots of exterior teak. Not only does it have teak decks like the Northwind, but it has teak trim everywhere. The teak trim looks fantastic, but a lot of maintenance (varnishing) is required to keep it that way.﻿

Finally, a brief list of pros and cons of the Hans Christian 44:

Pros:
Heavy (won't feel it move while at dock)
Bright, well-ventilated pilothouse area for dining and cooking
Easy-to-manage sail plan (multiple smaller sails instead of two big ones)
It is an eye-catcher, very shippy
Extremely well built
A real "living room" area separated from the dining table
Excellent woodwork, inside and out
Builder is still in business, sort of (new ownership and location)
Easy to move around in (only a few, shallow steps to get below, compared to a steep ladder)

Cons:
Slow
Hardest to maneuver under power (hard to dock)
Deep draft of 6'6" (same issue as with the Northwind, but slightly worse)
Most maintenance
Outside cockpit is small - less room for lounging around in the sun
No boarding platform (see Northwind description for the advantages of having one)
Only two staterooms, and the guest stateroom has a double bed, which isn't very flexible
Parts of interior are dark
Likely have to pay for longer marina slip to accommodate the bow platform (50 feet total length)
Smallest galley with very little storage
Getting old - all of them are 25 years old or older
Builder out of business, sort of (see pros)
Posted by Eric at 5:00 PM