Choosing a Boat, Part III - The Finalists, Subpart A - Northwind 43

In the first two parts of this ongoing series, I explained why we are looking for a center-cockpit monohull. It is now time to introduce the specific models we are looking at. Although we have specific boats in mind, we have not yet viewed any of them in person. Because large sailboats are always at least somewhat customized, no two boats of the same model are exactly alike. There are also condition, equipment, and pricing issues to consider. The purpose of this post, then, will be to explain only in general the models we are most seriously considering. We will withhold the specifics until once we have had the chance (hopefully soon) to get down to Florida to kick some tires (hah!--boats don't have tires).

There are two threshhold requirements that we believe all of these models meet (and that some otherwise very attractive boats do not). First, the mast height must be less than 65 feet. Some of the marinas in Miami, and most of the nearby sailing grounds, cannot be reached without going under some 65-foot bridges. Second, we need to be able to sail and handle the boat ourselves. We are not looking to take on crew every time we go out for a sail. Some things we are looking for, then, are a sail area of less than around 1000 square feet, sail-control lines led to the cockpit, and a design (or equipment, such as a bow thruster) that allows for good maneuverability under power.

With that out of the way, on to the boats, from smallest to largest.

The Northwind 43 is the smallest boat we are looking at. It is also the best-sailing, has the most modern design, and is probably the best built. Only seven were built, all hand-crafted in Barcelona, Spain. Here is the interior layout:

Although it is small, it is a nice use of space, and might work for us. The master stateroom in the back (left) has a centerline queen bed, places to sit, and two hanging closets. It also has a private head. The toilet and shower share the same area, with the sink separate. That is an unusual design, but makes some sense because the toilet and sink are separated by a door so one of us can go to the bathroom while the other uses the sink. The shower, I suppose, will keep the toilet area clean, too, so that is something. The galley has a good amount of counter space, and there is (probably) room for our rug next to the table/settee in the main salon. Although there is only one guest/kids stateroom, it is a traditional V-berth, which is a good use of space because two people can sleep on it with their heads separated. There are also two hanging lockers in the guest stateroom. There is a washer/dryer closet, too. One thing we don't like is that the guest head is a "wet head," meaning that the shower stall is not separate from anything. You shower right in the middle of the bathroom and water gets everywhere. Still, it could work.

The boat is raised salon design, which means that it has large windows to let a lot of light into the salon area. It feels much more like a bright house than a dark boat. Take a look: 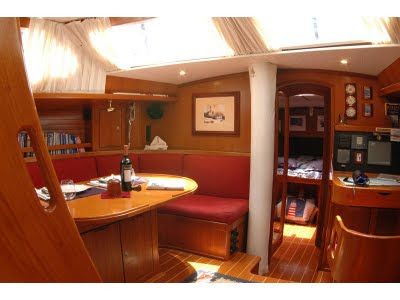 A bit messier than is ideal, but you can see how bright it is with the large salon windows, even though they are covered in the photo. I also like the molded teak desk chair on the right.


And here is a photo of the exterior of the boat: 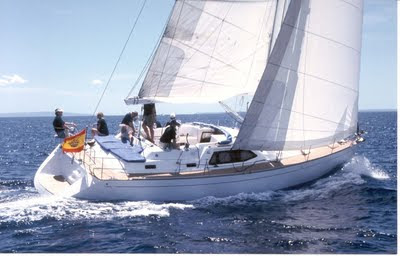 ﻿
﻿Note the boarding area/swim platform in the back. It can be pretty hard to get in and out of the water from a big boat, and that makes it a lot easier. Also, the decks are teak, which certainly looks sharp. The boat as a whole looks great, too, doesn't it?

Finally, here is a brief list of pros and cons of the Northwind 43.

Cons:
Only two staterooms
Smallest interior
No real "living room" area inside without dining table in the way
Lightest = most movement
Least amount of storage
Deep draft (6'4") = cuts off certain shallow cruising areas, and makes others more stressful
Posted by Eric at 12:36 PM